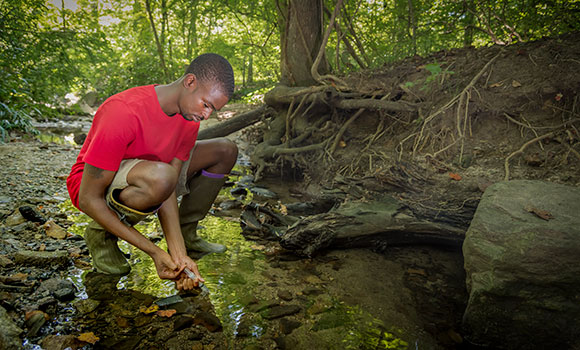 As seen on UNCG Now, by Alyssa Bedrosian

Austin Gray has always been inquisitive.

As the youngest of five boys, Gray was always asking – or pestering – his older brothers with questions.

Now as an adult, that same curiosity has led him to pursue a PhD in environmental health science at UNCG.

“Scientific research intrigues me because it allows me to keep asking why,” Gray said. “Asking why is what spurs science.”

A native of Charleston, South Carolina, Gray attended The Citadel as an undergraduate student, earning a bachelor’s degree in health, exercise and sport science. But it didn’t take long for him to realize that environmental research was his passion.

“After my freshman year, I landed a work-study job in the biology department,” Gray said. “I ended up working for Dr. John Weinstein, an environmental toxicologist who is now my mentor. By the time I started my junior year, I knew environmental research was what I wanted to do.”

Gray stayed at The Citadel to pursue a master’s degree in biology, focusing his research on how microplastics – small plastic particles used in cosmetics, clothing and other products – impact marine ecosystems.

As a graduate student, he served as vice chair and chair of the Society of Environmental Toxicology and Chemistry (SETAC) North America Student Advisory Council. When he graduated in May of 2015, he received the prestigious Outstanding Graduate Student Award for Academic Excellence and Leadership – an honor awarded to just one graduate student each year.

After graduation, Gray completed a one-year National Institute of Health (NIH) Post-baccalaureate Research Education Program (PREP) at The Medical University of South Carolina, an opportunity that solidified his passion for research.

What drives Gray to relentlessly pursue excellence? The answer is simple: family. Not only is Gray inspired by the work ethic of his brothers, godfather Dr. Robert Campbell Jr. and mother and the sacrifices they have made for him, but he also strives to honor the legacy of his father, who passed away when Gray was just 14. Gray’s father taught mathematics and biology for 35 years.

“Before he passed away, I made him a promise that I would make him proud,” Gray said. “My dad definitely inspired me. He’s the driving force.”

That driving force has landed Gray at the Department of Biology at UNCG, where he will spend the next four years exploring the environment and its impact on surrounding ecosystems and human health. While Gray is particularly interested in aquatic toxicology, he’s looking forward to the wide variety of research opportunities at UNCG.

“The program is an opportunity for me to explore a different set of research topics that I’ve never considered,” he said. “I want to use the next four years to grow as a scientist, writer and teacher.”

Why UNCG? For Gray, it came down to the university’s emphasis on relationships.

“UNCG’s program will allow me to really get to know the faculty and students and have relationships with them outside of the classroom,” he said. “I think having those personal relationships makes you a better scientist.” 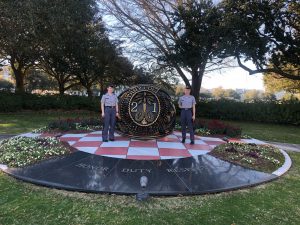