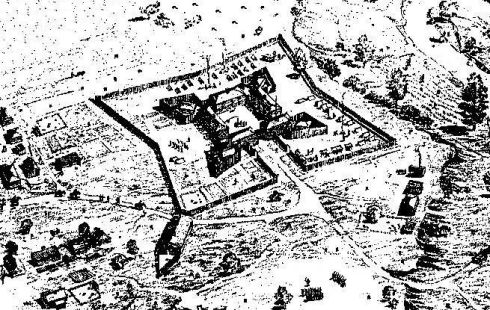 As seen in Stars and Stripes, by Valerie Myers

George Washington really did sleep here, or in Waterford anyway, during his visit to the French commander at Fort LeBoeuf on Dec. 15, 1753.

The Fort LeBoeuf Historical Society will mark the 265th anniversary of Washington’s visit this Dec. 15 with a “Trail to a Nation” celebration. The event will feature talks by award-winning historian David Preston during lunch and dinner programs.

“It’s going to be a celebration of George Washington’s first public mission, the mission that kind of kickstarted the rest of his career, military wise,” said event Chairman Patrick Jenks.

The Trail to a Nation event also will include the raffle of a framed print depicting Washington’s visit donated by Pittsburgh-area artist John Buxton.

Medallions designed by Joan Mancuso of Erie to commemorate the anniversary of Washington’s visit will be available for purchase.

The event also will include re-enactors and special displays at the Fort LeBoeuf Museum.

Preston is a professor of history at The Citadel in South Carolina. His research explores the co-existence of the French, British and Indian communities in the late 18th century. His most recent book, “Braddock’s Defeat: The Battle of the Monongahela and the Road to Revolution,” published by Oxford University Press, has earned six awards and other distinctions, including the $50,000 Gilder Lehrman prize for best English-language military history book in 2015.

Preston is a western Pennsylvania native who earned his undergraduate degree in history from Mary Washington College in Virginia and master’s and doctoral degrees in American history from the College of William and Mary.

His “Trail to a Nation” talks will explore how Washington’s military experiences during the French and Indian War prepared and shaped him for later responsibilities in the Continental Army.

The luncheon and dinner programs will be held at the American Legion post at 120 W. Fourth St. in Waterford.

Dinner will be from 5 to 7 p.m. Cost will be $50, including a limited-edition commemorative medal, $40 without.

The print that will be raffled during the anniversary event is Buxton’s “Domain of Three Nations,” depicting then-21-year-old Washington’s delivery of a message from British authorities to the French at Fort LeBoeuf. The message, basically, was, “You are trespassing on British territory; leave.”

A print of the work is displayed at the Fort LeBoeuf Museum.

Buxton was an illustrator for 31 years and for the past 20 years has painted meticulously researched scenes of 18th-century America. He is a North Carolina native and earned a degree from the Art Center College of Design in California.

Buxton will attend the Trail to a Nation celebration, Jenks said.

Tickets for the print raffle will be on sale at the museum, the Eagle Hotel and other Fort LeBoeuf Historical Society properties and during the Trail to a Nation celebration, Jenks said. Cost is $5 for three entries.

The medallion designed for the event will be sold for $20. The medallion depicts Washington and guide Christopher Gist and their “Washington’s Trail” route to Fort LeBoeuf.

Mancuso also has designed medallions for the Braddock Road Preservation Society, for the Fort LeBoeuf Museum reopening in 2012, and for a decade of French and Indian War commemorations at the Boy Scouts’ Custaloga Town camp.

The Fort LeBoeuf Museum will open at 10 a.m. Dec. 15 with displays related to Washington’s visit and the French and Indian War. Re-enactors will portray Washington and Gist.

“Washington’s visit to the French at Fort LeBoeuf is a big part of our history as a nation,” Jenks said. “It really was the ‘Trail to a Nation.'”

Fort LeBoeuf was built in 1753 as a link in a chain of French forts between Fort Presque Isle in Erie and forts in and around Pittsburgh. The forts helped the French secure and move supplies and trade goods from Lake Erie to LeBoeuf Creek and on to French Creek and the Allegheny, Ohio and Mississippi rivers.

The British and Americans manned forts near the site after the French abandoned Fort LeBoeuf in 1759.