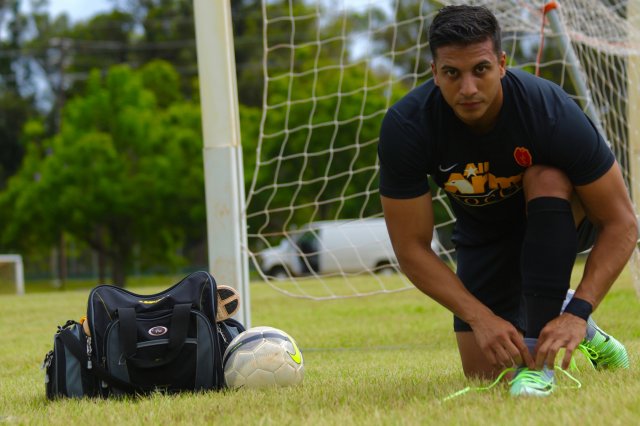 As seen on Army.mil, by Sgt. Ian Ives

What would you give to serve your country? Would you turn down an opportunity to play a professional sport?

Though soccer has always been a large part 1st Lt. Anthony Uriarte’s life, he declined multiple professional soccer contracts to follow his calling of being an officer in the United States Army.

Now a medical service officer with the 25th Sustainment Brigade, the 26-year-old Uriarte has led an fascinating life due to his talent on the soccer field.

Uriarte, an Orlando, Florida native, started his sports career off at a young age playing baseball until he became bored with the pastime at around 9 years old.

“I didn’t feel there was enough competition,” said Uriarte. “It was just very stagnate, and a lot of standing around. So I told my dad I wanted to play another sport that was more active.”

His dad told him that he was not going to play football, because he did not want him to get hurt, and suggested he play soccer.

He was hooked almost immediately, but starting off he hit a bit of a roadblock. When he first started playing soccer he was made to play goalie on his team due to his inexperience with the sport. His coach at the time figured that since he had played baseball he would be a good fit for the position.

“They threw me in to play goalie, but now we are back at square one of my problem; standing around,” laughed Uriarte. “I told my coach, ‘I joined soccer so that I could run around and get rid of all this energy’ and that is when he started playing me on the field.”

Now, finally getting to play a more active role on the field, Uriarte took to playing the defender position. As a defender he explained how versatile he can be by not only defending, but by assisting his team with scoring.

“I just love the fact that as a defender that I can take the ball away and crush dreams,” said Uriarte with a laugh in his voice. “I just loved knowing that I had full accountability for my actions; if I lost the ball there is no one behind me to keep the other team from my goalie.”

When Uriarte was around 14 years old, he was invited to play in a soccer competition in the Netherlands named The World Friendship Games. While playing in this competition, which hosted teams from all around the world, he had a heavy realization.

“The passion that I saw… it was so intense,” exclaimed Uriarte. “These kids were out there fighting for youth contracts, in hopes of one day turning pro, for The Eredivisie, one of the world’s highest leagues in the Netherlands, and all I could think was, ‘Wow this is just crazy.'”

No one at the competition played any sport other than soccer. Uriarte explained that if you did not play soccer in these countries you were almost considered an outsider.

“When I saw this, I knew I was hooked,” said Uriarte.

After the competition, Uriarte returned home and had made the decision that he only wanted to play and focus on soccer.

At the age of 15, Uriarte was selected to play on a team that would represent the United States on a tour of England and play many prestigious teams during the trip. A year after the tour, he traveled to the Dominican Republic with his grandma to visit his uncle, where be offered the chance of a lifetime.

“I knew that being in the military was something I had always wanted to do, so I did not want to take out that second passport and make it harder to join later on,” said Uriarte.

After playing a pick-up game at a local park in the Dominican Republic, Uriarte was approached by a Club Atletico River Plate scout who begged him to join Centro de Entrenamiento para Futbolistas de Alto Rendimiento, owned by Futbal Club Barcelona Spain, the youth soccer club in Argentina. The intent behind the club was to train up young players to eventually play for Barcelona, or other professional teams.

“I told my mom about it when I got back to Orlando,” said Uriarte. “So she disenrolled me from physical school so I could do all my school online, and then I moved to Argentina to play soccer full time.”

After playing more than a year with CEFAR, Uriarte, now 17 years old, was offered multiple professional contracts from teams like Club de Gimnasia y Esgrima La Plata out of Argentina, and a college scholarship to Saint Ambrose University, Iowa. Faced with this crossroad, he decided to focus on his education and chose to attend college at Saint Ambrose.

While he was getting the education he wanted from Saint Ambrose, he did not feel that their soccer team offered him the amount of competition that he craved. After a semester in Iowa, he transferred schools to Towson University in Maryland to play in a Division One league.

“I was taking a physical education course and I remember this girl walking in, in an Army Combat Uniform one day, and I was like ‘What,'” said Uriarte. “At the time I didn’t know anything about the military, but I found it so interesting that you could be a student and be in the Army. She always came in on time, and acted very professional. I admired her for that.”

Uriarte decided to research the Reserve Officer Training Corps. After looking at his options, Uriarte applied and was accepted into The Citadel, The Military College of South Carolina.

After graduating in 2015 with a Bachelor’s in political science with an emphasis on pre-law, Uriarte had to choose which branch of the Army to gain his commission in.

“One of my big things is figuring out what I can do to help other people,” said Uriarte. “So when I found out that I could commission as a medical service officer, I thought ‘That’s perfect.'”

After being commissioned and doing a year of gold-bar recruiting, Uriarte was stationed at Schofield Barracks, Hawaii with the 3rd Brigade Combat Team, 25th Infantry Division in 2016. While with the ‘Bronco’ brigade, he played on an Armed Forces Soccer team where a fellow player, who had played in All-Army Soccer before, suggested he try out for the team.

Despite Uriarte’s past with soccer, the tryouts were not for the faint of heart. According to Army MWR, the selection process starts with the application packet and players are ranks based on their past experience. Once players take the field the selection process becomes even more intense.

“The first year I tried out the team only needed about five new players; there were more than 45 of us trying out,” stated Uriarte. “You never knew if it was going to be your last day or not. The coaches would just walk up to you during practice and tell you that you don’t have what it takes, then you were gone.”

Uriarte was approached by a coach one day during the tryouts and was told that he needed to change his playing style in order to fit in with the team. His original style of play focused more on finesse, but he had to switch to a more aggressive and straightforward form of soccer.

“I did some studying on the formations and style of playing the coaches wanted me to play, and ended being one of the few guys they accepted as new players,” said Uriarte.

After being selected for the All-Army soccer team, Uriarte and his fellow players traveled to Fort Benning, Georgia, to compete in the Armed Forces soccer tournament against the other branches of the military.

With 2017 came a new assignment in the form of an inter-post transfer to the 25th Sustainment Brigade and another year of All-Army Soccer. Tryouts were also different for Uriarte due to his selection the year prior, giving him an almost guaranteed position on the team.

This year, instead of an Armed Forces Tournament, the All-Army Soccer team traveled the United States playing high-level college teams. The All-Army team was also afforded the opportunity to play against the Georgia Revolution, a professional team in the National Premier Soccer League.

This match was particularly intense due to the large crowd and giant stadium they played in.
“No matter what you tell yourself, no matter how much you prepare, when the referee blows that whistle… you’ll think to yourself, ‘This is really happening!'” laughed Uriarte.

Since returning from the All-Army team this year, Uriarte has begun coaching soccer for Hawaii Rush Youth Soccer for boys around the age of 15 years old. Coaching is something that Uriarte says he is becoming increasingly passionate about. He has even spoke with officials from Moanalua High School, Honolulu about becoming a coach for their soccer team.

“As unfortunate as it sounds we all have to get older,” said Uriarte. “Hopefully when my playing days over I will be able to step into a coaching position for All-Army. Even if I am not on the field playing, I can continue contributing in some way.”