The provost and dean of The Citadel is the recipient of this year’s Dr. Martin Luther King Jr. Humanitarian Award from The Black History Intercollegiate Consortium. Cadets representing The Citadel presented Connie Book, Ph.D., provost and dean of the college, with the award during the consortium’s Dr. Martin Luther King Jr. observance program on January 16.

Book, who will depart to become president of Elon University in March, was recognized for her contributions to the community and the college, which the consortium believes exemplify the life and legacy of King. Book is the highest ranking woman in the history of The Citadel, in the position that is second only to the president.

“Dr. Book is a loyal leader in The Citadel’s commitment to expanding diversity and inclusion,” said Cadet Gabriel Massey, who presented the award to Book. “Her dedication is shown not only in her words but in the time she devotes to cadets and in the many improvements she has initiated at the college.” 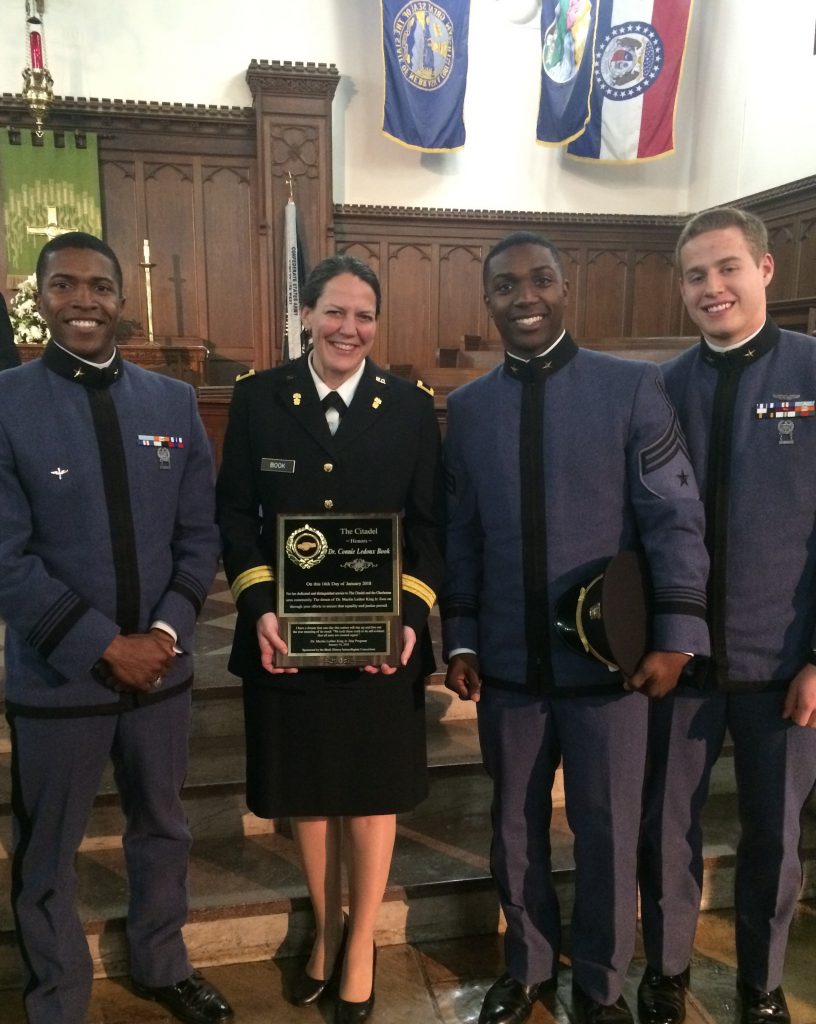 Book joined The Citadel in 2015. During her tenure, she embraced her groundbreaking position, leading college-wide diversity and inclusion efforts.

In 2016, she established the postdoctoral fellowship program focused on minority faculty recruitment and added a Latino student adviser to the Office of Multicultural Student Services and International Studies.

With her support, The Citadel reached record enrollment for African American, female and Latino freshman. The Citadel was also selected by the Association of American Colleges and Universities as one of 10 colleges in the United States to develop guidebooks for other colleges to support campus and community conversations on racial understanding and equity.

Founded in 1988, The Black History Intercollegiate Consortium represents students and staff who are committed to improving cultural and ethnic diversity. It consists of four area colleges and universities —The Citadel, the Medical University of South Carolina (MUSC), Charleston Southern University, College of Charleston and Trident Technical College. This year, the consortium’s Dr. Martin Luther King Jr. observance program was hosted by The Citadel.

“It’s been a pleasure to serve as the host institution for the 2018 Dr. Martin Luther King Jr. Observance program,” said Robert Pickering Jr., director of multicultural studies at The Citadel. “As we continue to develop our students into principle leaders, we can reflect on the leadership of Dr. King whose fight for justice and equality has provided an everlasting example of servant leadership for all to follow.”