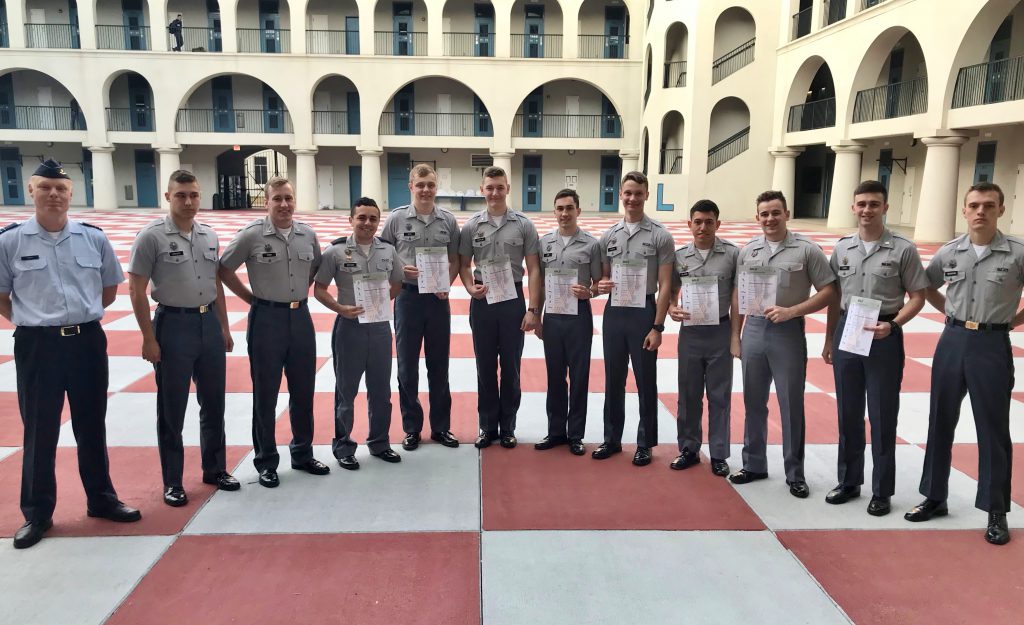 The Citadel Foreign Military Auxiliary turns a year old this spring after being chartered in the spring of 2017. Their efforts were recognized by the Royal Netherlands Armed Forces January 26, after 23 cadets passed a series of exercises that Dutch forces must complete.

“We wanted to develop a better understanding of the foreign military forces with whom the United States worked, and we wanted to help educate other cadets too,” said Cadet Joshua Erney, the auxiliary’s commander and one of the founders. “So under the guidance of our training officer, we started The Citadel Foreign Military Auxiliary.”

Lima Company Tactical, Advisory and Counseling (TAC) Officer, Capt. Wouter Sijtsma, who is an active duty member of the Dutch Air Force Reserve, helped the cadets get started and serves as the group’s advisor and project administrator. Members of the auxiliary gathered to accept an honor they earned over the past months, The Dutch Military Proficiency badge, called the Militaire Lichamelijke Vaardigheid. It is an international military award reviewed and issued by the Royal Netherlands Armed Forces.

“Earning the badge requires proficiency in a series of seven events that test a soldier’s combat efficiency. The exercises include an obstacle course, a 1000 meter rifle sprint in the country’s respective combat uniform, a three-mile run, a “cat-crawl” across a horizontal rope, a grenade toss, a rope climb, and a 200 meter swim, “ said Jack Marquez, another auxiliary founding member. “Every event is timed for either a pass or fail. Failure in even just one event eliminates a candidate, with the exception of the swim. If someone fails the swim they receive the award, but without the blue enamel representing water in the center.”

Jacob DiSabatino, the auxiliary’s first sergeant, says The Citadel Foreign Military Auxiliary is the only college in America administrating the test, with last year’s group being the first group to earn the Militaire Lichamelijke Vaardigheid stateside. “We are currently working on expanding this opportunity to the South Carolina National Guard and hopefully one day active duty personnel.”

The auxiliary will learn about other American allies’ training procedures and cultures in the future.