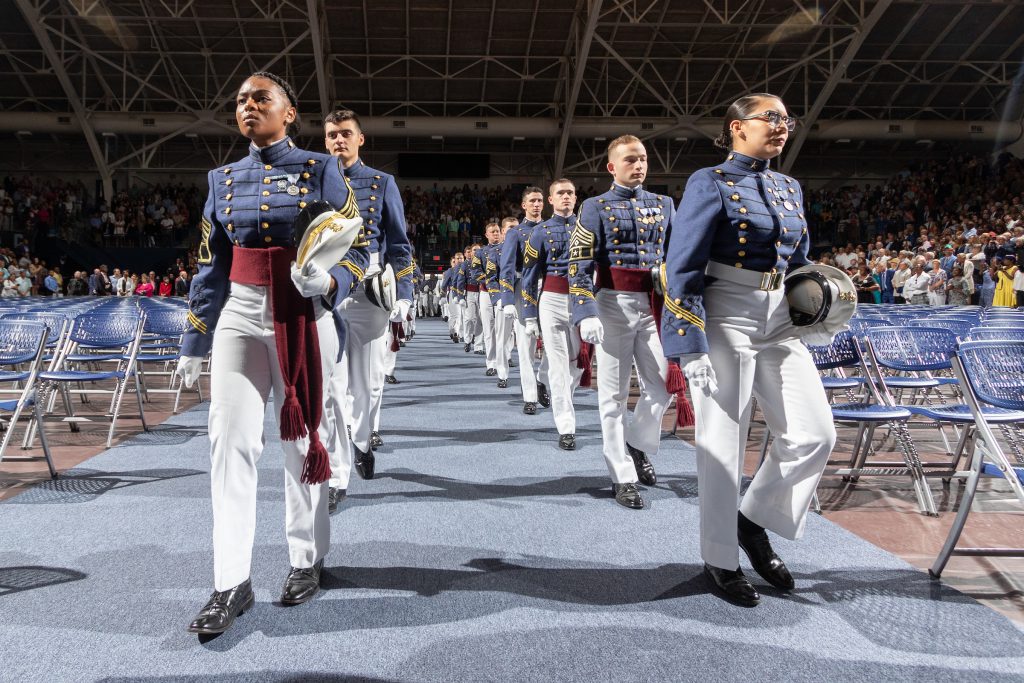 Photo above: The South Carolina Corps of Cadets Class of 2019 Commencement

This May, approximately 1,000 cadets and Citadel Graduate College students will graduate from The Citadel. The college is laying the groundwork for in-person Commencement ceremonies for both groups. Additionally, the speakers for the ceremonies are prepared to address cadets, students and their guests in person. Each graduate will be provided with electronic tickets for a limited number of guests, as the college anticipates the need for continued social distancing.

“We surveyed last year’s graduates to ask what the two most important factors of Commencement were to them. Overwhelmingly the answers were to graduate alongside their classmates and to have their parents/family present,” said The Citadel President, Gen. Glenn M. Walters. “This year, with more time to plan than we had last spring, we are thrilled to be able to make that happen.”

Current plans call for the South Carolina Corps of Cadets (SCCC) Class of 2021 to be divided into two groups for two separate, on-campus ceremonies that will be held on Saturday, May 8 in McAlister Field House.

The Citadel Graduate College students will also be divided into two segments for two ceremonies in McAlister Field House. Those events will take place on Sunday, May 9.

Only clear bags will be allowed inside the stadium; metal detection and scanning walk-through entrances will be in place.

The ceremonies will all be livestreamed for extended family members, as well as those unable to attend in person due to pandemic-related conditions or an inability to travel.

“We expect that about 60 days before graduation weekend we can provide finalized details based on the evolution of the pandemic. That is when we’ll know if other commencement-related activities, such as the Long Gray Line parade and awards ceremonies, can be held.” said Kevin Bower, Ph.D., associate provost for Academic Operations and Civil Engineering professor.

The Citadel Commandant of Cadets, Captain Eugene “Geno” Paluso, USN (Ret.), ’89, will address the SCCC Class of 2021. Paluso will retire from the position of commandant on June 30, 2021.

Paluso was born and raised in Washington, Pennsylvania. He attended college at The Citadel where he earned a Bachelor of Arts in Mathematics in 1989. He began his military career in the Navy after being commissioned an ensign upon graduation and reported for duty as a student at Basic Underwater Demolition/SEAL (BUD/S) training in Coronado, California where he graduated with Class 164 in 1990. He went on to serve as a U.S. Navy SEAL officer for more than 25 years. He retired from the Navy in July 2014, joining his alma mater as Commandant of Cadets.

During his career, Paluso held leadership roles commanding special operations forces in the Balkans, Africa, Iraq and Afghanistan. He has led men and women in combat at all levels. Paluso has a Master’s of Military Science from the U.S. Marine Corps Command and Staff College as well as a Master’s of Science in National Security Strategy Resourcing from the Industrial College of the Armed Forces. His service awards include the Defense Superior Service Medal, Legion of Merit, Defense Meritorious Service Medal, Bronze Star, Meritorious Service Medal (2), Joint Commendation Medal (2), Navy Commendation Medal (5), Joint Achievement Medal, Navy Achievement Medal, as well as numerous other service awards and commendations.

Norman Seabrooks, The Citadel Class of 1973, will address The Citadel Graduate College’s graduates. Seabrooks returned to campus to speak to cadets in 2010 about how his Citadel experience shaped and motivated him to succeed in his career; now he will return once again to speak about The Citadel and his career experiences.

Seabrooks was the first African American to play football for the Bulldogs. He entered The Citadel at a tumultuous time in the nation’s history. The Vietnam War raged on in Southeast Asia while anti-war protests caused unrest at home, and the Civil Rights movement experienced some of its darkest moments with the assassination of the Rev. Dr. Martin Luther King Jr. Throughout the South, the civil rights movement was marked by violence, unrest and the struggle for equal rights. At The Citadel, African American students also struggled at what was then an all-male and predominantly white military college in the South.

The first African American cadet, Charles Foster, graduated in 1970, — one year before Seabrooks enrolled. Amid the challenges of the times, Seabrooks distinguished himself on the gridiron. A three-year starter on the football team he earned first-team All-Southern Conference recognition in 1972 and he served as team co-captain while playing for coach Red Parker. He was inducted into The Citadel Athletics Hall of Fame in 1994. A Dean’s List history major who obtained the rank of cadet first lieutenant, Seabrooks graduated in 1973 and went on to a successful career in the health insurance industry with Aetna Inc., where he was Pacific Northwest Market President for the company. He retired as one of the top 100 employees at the Fortune 500 company with 35,000 employees.

Seabrooks grew up in Pahokee, Florida. He lives in Seattle.

Personal graduation page for each member of The Class of 2021

A popular feature the college provided for graduates in 2020 will also be provided to the Class of 2021.

Just before graduation weekend, every graduate can log on to a commencement website to view their own graduation page, created just for them. The graduates can share their pages easily on social media platforms. Some of the features will include a photo, video and messaging center for loved ones to share their congratulations, plus a recording of the ceremony to watch at will. Details on how to upload videos and greetings will be shared at a future date.