Carmine Pecorelli, Class of 1954, named Alumnus of the Year by Citadel Alumni Association 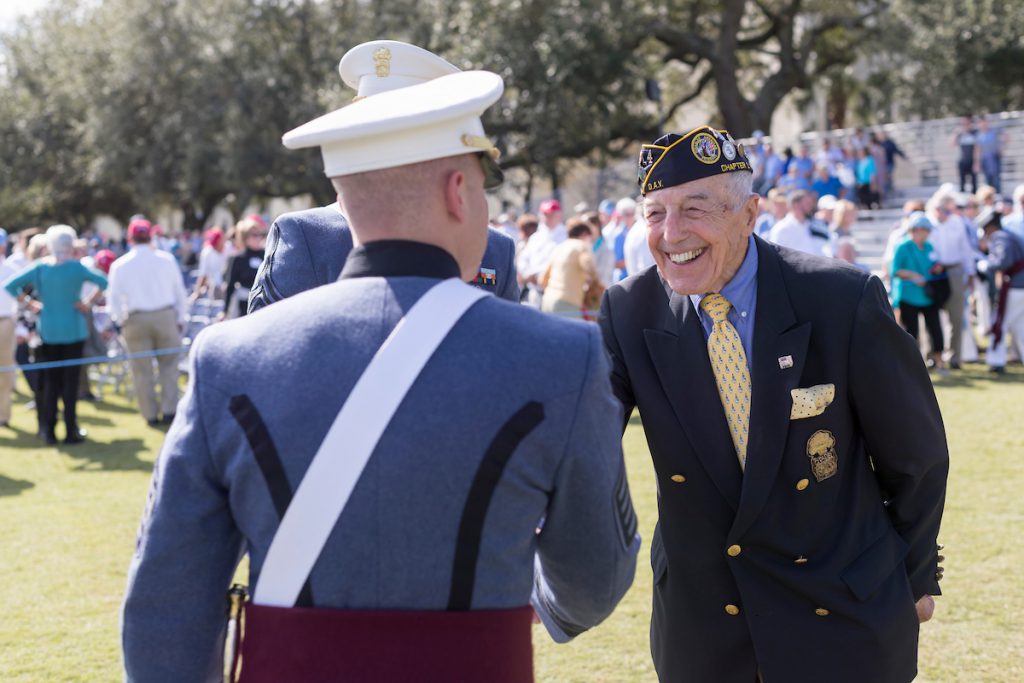 The oldest member of The Citadel Class of 1954, Carmine Pecorelli, is The Citadel Alumni Association’s 2017 Alumnus of the Year. Pecorelli was presented with the award on Oct. 28 during the college’s homecoming weekend.

He became a cadet at The Citadel at the age of 25 after returning from service in World War II and went on to serve in the Navy in Korea and Vietnam. Now in his 90’s, Pecorelli is still very active in The Maine Citadel Club, near his home in Belfast, Maine.

According to the award citation from the Citadel Alumni Association, Pecorelli worked to bring the Traveling Vietnam Wall to his local museum and served as one of the hosts while it was there. The citation also states that Pecorelli has raised funding for honor flights from Maine for veterans to go to Washington D.C. – the Honor flight Network provides transportation for American veterans to travel to the nation’s capital to view the memorials related to their service.

Additionally, Pecorelli served as marshall for the Wreaths Across America annual caravan from Main to Arlington National Cemetery in Washington D.C. to place wreaths on graves. During one of his many trips there to honor America’s veterans, he was selected to place the wreath on the Tomb of the Unknown Soldier. Pecorelli also placed wreaths on the graves of his Citadel classmates and on the grave of former Citadel president, Gen. Charles P. Summerall.

Pecorellii, who recently told the Penobscot Bay Pilot that his physician describes him as “having the body of a 55-year-old,” offered one of his kidneys to assist another Citadel alumnus living in Maine who is in need of a kidney transplant. According to the alumni association, testing to determine whether the transplant would be a match has not been completed at the time of this announcement.

The citation concludes by stating the following:

After serving in three wars, Carmine continues a life of service to the country and the veterans that have given so much. Mr. Pecorelli’s deeds and actions reflect and regoznie the importance of his education at The Citadel and he exemplifies its core values of Honor, Duty, and Respect.