Cadets recognized for excellence with MacArthur and Cincinnati awards for 2018 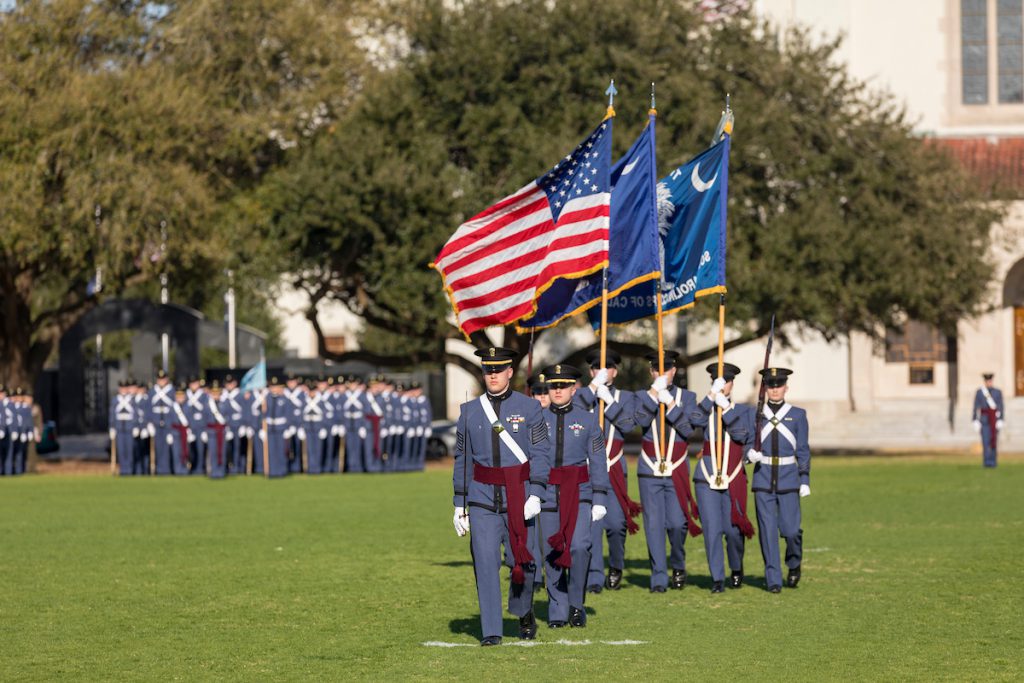 After earning prestigious awards, two members of the South Carolina Corps of Cadets are being recognized as leaders among their peers. Cadet Col. Dillon Graham received the General Douglas MacArthur Cadet of the Year Award, and Cadet Lt. Col. John Cordes was honored with the Medal of the Society of the Cincinnati Award (South Carolina chapter). The cadets were recognized during The Citadel’s dress parade Feb. 16.

Each year the General Douglas MacArthur Foundation presents MacArthur Cadet of the Year Awards to the most outstanding cadets from the 12 colleges and universities comprising the Association of Military Colleges and Schools (AMCSUS). Graham, who serves as regimental commander for the South Carolina Corps of Cadets, was chosen for his exemplary leadership, academic performance and high level of engagement in mission success.

Graham is a native of Conway, South Carolina. He is a biology major and has earned Gold Stars for academic achievement every semester during his four years at The Citadel. He was named to the President’s and Commandant’s Lists multiple times for excellence in academic and military duties. Graham emerged early as a leader in the Corps, serving in various positions at company and battalion levels. As a junior, he was selected as the third battalion sergeant major. In that role, Graham established a reputation as a firm but fair leader among peers, subordinates, and superiors. His dedication to The Citadel’s mission of producing principled leaders led to his selection as regimental commander – a job he approaches with dedication to the core values of honor, duty, and respect.

Graham is a student in the honors program and was the recipient of the Star of the West academic scholarship for the class of 2018 upon entering the college. He has maintained a 4.0 cumulative grade point average all four years. Graham’s accomplishments extend to his commitment to the U.S. Air Force having earned several performance awards in the areas of academic achievement and physical fitness. A founding member of The Citadel’s Omicron Delta Kappa chapter, the national leadership honor society, Graham will complete his college career as a distinguished military graduate with plans to attend medical school.

Cadet Lt. Col. John Cordes, a native of Summerville, South Carolina, received the South Carolina Society of the Cincinnati Medal. Cordes has distinguished himself academically, earning dean’s list and gold stars multiple times. A criminal justice major with intelligence minor, he holds a 3.8 cumulative grade point average in a 4.0 system. He was also named to the President’s and the Commandant’s Lists in recognition for his overall cadet performance.

As an underclassman, Cordes served in a number of leadership and ROTC positions, including regimental command sergeant major and regimental executive office. His study abroad travel included a scholarship in Peru, an Army ROTC cultural and language program in Rwanda, and an in-depth study of World War II history in France. Due to his outstanding performance as an FBI intern, Cordes was selected as a presenter at the National Academy of Criminal Justice Science’s annual conference. A founding member of The Citadel’s Omicron Delta Kappa, the national leadership honor society, Cordes will complete his college career as a distinguished military graduate.

Upon graduation in May, Cordes will receive a commission as an officer in the U.S. Army. He will join the other Society of the Cincinnati recipients whose names are on the memorial plaque located in the lobby of Bond Hall.

The Medal of the Society of the Cincinnati Award bears the name of a Roman farmer, Cincinnatus, who left his farm to take up arms and fight for his city. A successful general, he was an acclaimed dictator, but chose instead to return to civilian life. The officers who served in the Continental Army formed the Society. Their charter members included George Washington, Alexander Hamilton, and Marquis De Lafayette. The South Carolina chapter, established in 1783, is one of the six original state societies that have been in continuous existence since that time.