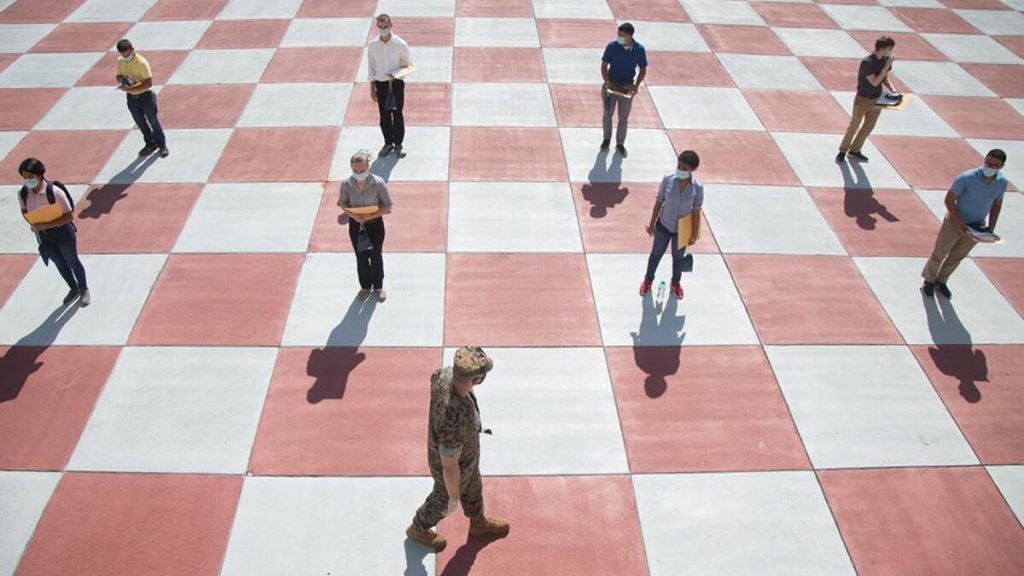 Photo: Poolees arrive at The Citadel in Charleston, South Carolina, May 4. The Citadel is temporarily being utilized to stage poolees for a 14-day observation period. (Courtesy: Staff Sgt. Rebecca Floto, Marine Corps)

As seen in the Marine Corps Times, by Shawn Snow

The Citadel, a public and military college in Charleston, South Carolina, is temporarily staging incoming poolees headed for recruit training for 14 days for observation due to COVID-19.

The recruit depot at Parris Island, South Carolina, posted images to Facebook of incoming poolees being screened by medical personnel who arrived May 4 at The Citadel.

Roughly 300 personnel and 300 poolees are currently housed at The Citadel, Capt. Bryan McDonnell, a spokesman for the Parris Island recruit depot, told Marine Corps Times in an emailed statement.

Personnel at the Citadel are “restricted to campus grounds as a preventative measure against COVID risks,” McDonnell said.

McDonnell explained that Parris Island hosted an initial staging effort constructed on the installation when shipping of recruits resumed on April 20 following a temporary pause.

But Parris Island continued to pursue other staging options to “further harden our posture against COVID-19,” McDonnell said.

“The ability to conduct staging of poolees in hard structure berthing with rooms for 2-4 personnel, as well as on-site laundry, infirmary, and mess facilities, led MCRD Parris Island to a temporary partnership with The Citadel,” McDonnell said.

“This partnership enables our continuing mission of making Marines while enhancing our staging capabilities,” McDonnell explained.

While in staging, the poolees will conduct training and classes to maintain preparedness to start recruit training, McDonnell said. The Poolees will also be observed and screened twice daily by medical personnel over the two-week period.

Following the two-week staging period the poolees will be shipped to Parris Island to begin Marine boot camp.

A video of the poolees arriving showed the future Marine recruits being handed Meals Ready to Eat, commonly known as the MRE, for food.

The current president of The Citadel is retired Marine Gen. Glenn M. Walters who served as the 34th Assistant Commandant of the Marine Corps.

McDonnell said The Citadel was chosen for staging because it is “uniquely postured to support the type of supervision and training we were looking to conduct based on the layout of their barracks and proximity to the Depot and major airports.”

The recruit depot in San Diego, California, previously implemented a 14-day staging period for incoming recruits for observation prior to stepping foot on the iconic yellow footprints and commencing boot camp.

Both Parris Island and San Diego have experienced large breakouts of the virus. Nearly four dozen recruits within one company aboard the San Diego depot tested positive for COVID-19. Parris Island temporarily suspended the arrival of new recruits following a breakout on the installation.

Other safety measures have been implemented to include social distancing when feasible, extra space between bunks in the squad bays, more spacing in dining facilities, and the wearing of face masks.

Marines are even conducting uniform inspections with face masks.

Marines with Oscar Company, 4th Recruit Training Battalion aboard Parris Island conducted a Marine Corps service Alpha uniform inspection on May while wearing face masks. Images were posted by the depot to Facebook.

“The function of the staging process remains the health and wellness of all poolees in our charge as they prepare to face the challenge of recruit training,” McDonnell said. “Staging is one portion of aggressive mitigation efforts being employed at recruit training to combat COVID-19.”