“Creativity is thinking up new things. Innovation is doing new things.” Theodore Levitt These words embody the ethos of my childhood. I grew up in California in a multicultural family with an American mother who was a college professor and an Armenian Middle Eastern refugee father who served as a diplomat. My upbringing was a bit unconventional. The value of intellectual curiosity was instilled in me at a young age, and I was constantly challenged to find innovative solutions to complex problems.

“Creativity is thinking up new things. Innovation is doing new things.” Theodore Levitt These words embody the ethos of my childhood. I grew up in California in a multicultural family with an American mother who was a college professor and an Armenian Middle Eastern refugee father who served as a diplomat. My upbringing was a bit unconventional. The value of intellectual curiosity was instilled in me at a young age, and I was constantly challenged to find innovative solutions to complex problems.

It was no surprise to find myself deep in the heart of Amman alongside my father at a holiday party hosted by several members of the royal family and military for joint forces and allies. After 40 years of hard work and a belief that the American dream was alive and well, my father assumed the rank of colonel in the United States Air Force. In his last deployment before retirement, he was working throughout Africa and the Middle East forging goodwill with our allies, and, as an early Christmas gift for completing my Ph.D., my mother and I flew out to Jordan to be with him.

At the party, I found myself engaged in a conversation with a Jordanian official about Jordan’s emphasis on preserving history and culture. Under the looming threat of ISIS, fringe fundamentalist groups started making attacks on religious and cultural heritage sites. The Middle East watched in horror as ISIS fundamentalists destroyed Palmyra, an ancient Semitic city in Syria that dates back to the Neolithic period. Unfortunately, once that history is gone, it is next to impossible to bring it back.

Nine months later, I accepted a position as a junior professor of entrepreneurship at The Citadel’s Tommy and Victoria Baker School of Business. One of my primary responsibilities involved starting the Baker School of Business Innovation Lab. I had a blank slate and knew from the conversation I had in Jordan that we could create a niche, combining innovation, technology, management and culture. We purchased three high-powered portable 3D scanners and sought to transform the landscape of cultural preservation.

In November, I was invited to conduct a pilot study with our scanners on the Bridges Collection held by the University of St. Andrews in Fife, Scotland. The Bridges Collection contains a wide range of artifacts from Cyprus that date from the Bronze Age and the Iron Age as well as the Byzantine period. The pilot study was a success, and I began looking for a project that would complement The Citadel’s legacy and have a lasting impact on cadets.

At the Special Operations and Airborne Museum located just outside of Fort Bragg in Fayetteville, North Carolina, I met with museum director James Bartlinski to discuss how the scanners could benefit the museum. As we discussed ideas for a project that would interest cadets, Bartlinski suddenly asked, “Have you ever seen Black Hawk Down?”
Not only had I seen the movie Black Hawk Down, I told him the film had made a big impression on me as a child.
“How would you like to scan the rotor of the actual Black Hawk that went down in the battle of Mogadishu?”

On October 3, 1993, during the Battle of Mogadishu, a Black Hawk helicopter with the call sign Super 61 was shot down by an enemy rocket-propelled grenade.

Super 61 crashed at 1620, killing the pilots, Chief Warrant Officers Cliff Wolcott and Donovan Briley, and injuring the other crew members aboard.

An urban battle ensued and continued throughout the night, resulting in the deaths of 18 Americans and hundreds of Somalis.

The remains of Super 61 were not recovered until nearly 20 years later, when, in 2012, Polaris Business Intelligence and Investigations was able to arrange for the wreckage to be unearthed from where it had lain in Mogadishu. It was repatriated to the United States in August 2013.

Pictured throughout this story is the largest piece of unearthed wreckage, the rotor of Super 61.

The 3D scanners we purchased are designed and manufactured by ARTEC Industries. They are industrial-grade scanners that enable us to produce full-scale renderings of a variety of products and allow for reverse engineering. The other advantage of these scanners is their portability. The sleek design and capacity make these scanners look like something out of Star Trek and give us the ability to reach others instead of expecting communities to come to us. So often we seek to help others but on our terms. I wanted to ensure we had all the resources and capabilities to go out to the community and serve.

During the semester, the cadets and I worked on understanding the software protocols of the scanners and the programming software in preparation for the Black Hawk rotor project. We scanned test products such as small statues, bones and even a mini-NASCAR vehicle, which we ended up printing in 3D. Additionally, students volunteered to scan products and collections at the Charleston Museum to build their awareness and understanding of how technology, innovation and the humanities can unite.

There was a sense of excitement brewing among the three cadets as we arrived in Fayetteville. This was no ordinary class trip; they would be participating in a project that would help preserve a piece of American military history. At the same time, I was anxious—in Scotland, the scanners had worked brilliantly, but this was our first test of the scanners on an object of this scale. I was just hoping nothing would go wrong.

The next morning, I woke up early, eager to get the day moving to build in a little extra time in the schedule in case something happened. As we left the hotel parking lot, I was struck by how beautiful the day was. I hoped the cadets enjoyed being in the presence of history and recognized how history played a role in securing the freedom we know today.

The Special Operations and Airborne Museum is one of the most incredible museums I have ever visited, and I have been to quite a few. As we walked through the lobby of the museum, I could see the cadets looking around, awestruck by the military memorabilia and biographies of featured soldiers spread throughout the area. I ushered them down the hall, and there it was, the 10- by 10-foot rotor staring at us like a gallant survivor. I remember one of the cadets asking, “How are we going to scan all that?” 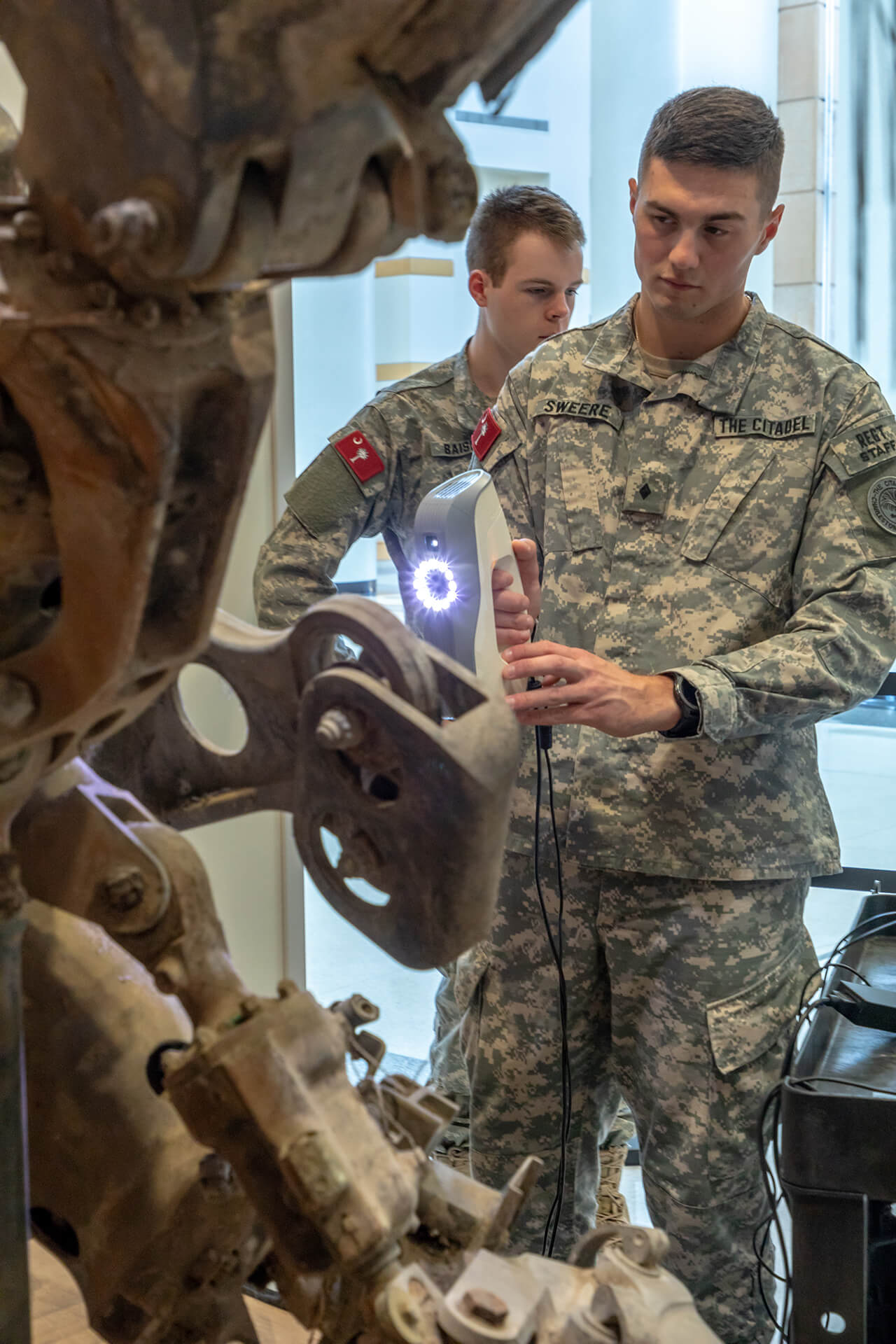 We took out the scanners, and I sat the cadets down at the base of the display and gave them a pep talk—this was an incredible honor, and they should be proud of all they had learned and how far they had come. I suggested that we start scanning the base of the rotor and work our way up to the blades. They agreed, and we started to get the scanners up and running.

As we plugged everything in, the scanners started to warm up, and we all hoped the laptop would light up with the 3D display without any glitches. One of the cadets grabbed the scanner, clicked the button and started. The laptop lit up like a Christmas tree, and the excitement was palpable. Kids who were touring from the local middle schools and high schools came to see what was going on. Eager with questions, they watched in amazement as the cadets moved the scanner across the wreckage and an image instantly appeared on the laptop. The cadets worked together to scan the underside and all angles of the rotor system while I guided them through the process.

As we finished the first phase, the museum suddenly lost power. We looked at each other in disbelief, grateful that we saved the last scan. We learned later that an automobile had struck one of the main power transformers, causing the city to lose power. With no electricity, we decided to break for lunch.

Three hours later, power was restored, and little by little, we continued scanning the massive rotor. In total, we spent four hours scanning the rotor. Scanning in 3D usually requires multiple passes. The scanner assigns polygons to the object and then stitches them together in the program to create the entire image. Technique in scanning is important—with practice, you develop a feel that helps you scan the object properly.

Our goal for this project was to supply the museum with a 3D model of the rotor to be used in educational and training materials. The Citadel’s innovation lab is in its infancy. We currently have a small location in the Baker School of Business and hope to continue our growth over the years and form partnerships that will allow cadets to learn the importance of history and culture while solving complex problems with innovative thinking.

History plays an important role in our lives and teaches us many lessons. Twenty-five years ago, a U.S. Joint Special Operations Command mission to capture rebel leaders in Mogadishu, Somalia, went horribly wrong when two U.S. Black Hawk helicopters were shot down. The Battle of Mogadishu is a stark reminder of the dangers that American servicemen and women face every day as they put their lives on the line to protect our freedom. It was an honor to work with these young cadets to preserve a piece of that history and protect the legacy of those who died in service.

James Bezjian is an assistant professor of entrepreneurship and director of the innovation lab in the Tommy and Victoria Baker School of Business. He earned a Bachelor of Science degree in International Business and his MBA from Azusa Pacific University in Los Angeles, California. He received his Master’s of Letters in International Business from the University of St. Andrews in Scotland and was awarded his Ph.D. from the University of Edinburgh in Edinburgh, Scotland. He joined The Citadel faculty in 2017 and teaches small business management and entrepreneurship.

More to The Story

Super 61 Rotor from Black Hawk
by jbezjian
on Sketchfab