Former Charleston Mayor Joseph P. Riley Jr. graduated in 1964 and returned to his alma mater in 2016. In the 52 years between, Charleston, once a shabby Southern city mired in racial tensions and economic hardship, has emerged as a major tourist destination that attracts people from all over. And Riley, who led the way, has come full circle and is now drawing on his experiences to teach the next generation of leaders.

When the plebes, as the freshman cadets were then called, reported in the sweltering hot August days of 1960, John Fitzgerald Kennedy, a young senator from Massachusetts, was running for president of the United States. Famed World War II Army Gen. Mark W. Clark was president of The Citadel, and Lt. Col. Thomas Nugent Courvoisie, who would later be immortalized as the Boo in Pat Conroy’s book, was about to become assistant commandant of cadets. In those days, cadets attended weekly hops where they danced with young girls who wore pearls and white gloves and skirts with crinolines. The hops took place under the direction of a hostess, Mrs. Louise B. Dufour, and her assistant, Mrs. Llewellyn Izlar, who held dancing and etiquette classes for the Corps of Cadets. It was in these halcyon days that Joseph Patrick Riley Jr., a fresh-faced, fair-haired boy of Charleston, matriculated at The Citadel. Today, 57 years later, Riley sits in his office that overlooks Broad Street in downtown Charleston. On the wall behind his desk hang a picture of Martin Luther King Jr., an antique map of Charleston and a picture of baseball legend Jackie Robinson. Riley’s hair is now white and on his face are the horned-rimmed glasses that he has worn for most of his adult life. He wears a striped red tie and a navy blazer, and his bearing is as erect as it was in 1960. A lifelong runner, he remains as fit as in the days he wore his cadet uniform. He speaks in modulated tones with a charismatic Charleston brogue—a voice instantly recognizable to anyone who has lived in the Lowcountry over the last 40 years.

At 74, Riley is a legend in Charleston. He took office as mayor in 1975 and served for 10 terms and has the distinction of being one of the longest serving mayors in U.S. history. Upon his retirement in 2016, he returned to his alma mater, where he currently serves as the first occupant of an endowed chair of American government and public policy named in his honor.

Riley has a vivid image of his first week at The Citadel in 1960—the drills, the haircut, the physical demands, the exhaustion. And then he describes the esprit de corps that anyone who knows The Citadel comes to expect. “There’s really something about the bonding that happens at The Citadel,” he said, “because you’re going through something intense—harsh, not in a brutal way, but difficult. What’s so interesting about The Citadel experience is that these were people—only one I knew of, who was a classmate of mine at Bishop England [High School]—from different parts of the country and parts of South Carolina. But immediately, you became close friends. You were in something new and challenging together.”

This challenge arguably prepared Riley for the next challenge of leading Charleston from a faded seaport that struggled under the weight of economic stress and neglect into a thriving urban city known for its architecture, restaurants and cultural appeal. Named the top U.S. city by Travel and Leisure for five years running, Charleston’s popularity and success are a direct result of Riley’s tenure. As mayor he was responsible for bringing Spoleto Festival U.S.A., a 17-day performing arts festival, to Charleston in 1977 and for overseeing the revitalization of the city. Under Riley, parks and public green spaces were created, dilapidated buildings were replaced with elegant construction, and the declining King Street district evolved into a sophisticated shopping mecca. As a cadet, Riley majored in political science, but it was a history professor who most influenced him. Maj. Edward H. Phillips taught one semester on the Old South, and the next semester, the New South. “What I learned, and what I felt at this young age, was the tragedy of the South. It had burdened itself with the indefensible institution of slavery. And it was always the promise of the South to emerge as a national leader, and yet how would you rationalize the institution of one group of people owning another group of people or the succeeding institution of Jim Crow laws?”

After graduating from The Citadel in 1964, Riley attended the University of South Carolina School of Law, receiving his law degree in 1967. He married Charlotte DeLoach of Camden, S.C., and they had two sons, Joseph P. Riley III and Bratton Riley. He served in the S.C. House of Representatives from 1968 to 1974, where he helped push legislation for change, pioneered ethics reform and was the first to introduce a bill to hold a holiday in honor of Martin Luther King Jr. “I got into politics as a young legislator,” he said. “I gravitated to addressing issues involved with racial progress.”

Lessons in equality learned at The Citadel had a profound influence on Riley. “You learn a lot at The Citadel because of the system. Everyone is equal. You have the same uniform, the same shoes, the same room, the same everything. You don’t have station or your family’s resources—it’s a life enhancing lesson.”

Riley was only 32 when the African-American community asked him to run for mayor of Charleston. “There was this great disaffection in the African-American community,” he said. “There were many who didn’t understand the impact of the Civil Rights bill passing in 1964, the lunch counters being opened, the white and the colored water fountains going away, and the balconies in the theaters going away, and the schools being integrated. And that was progress, and the Voter Rights Act of 1965 enabled African Americans to register, so they were empowered and then they wanted change.”

When the business leadership and the African-American leadership asked Riley to run in 1975, he had not considered the idea of running for mayor. “I had never been to a city council meeting. I had no aspirations, but I knew enough, and just having an interest in all of this, that there was a change afoot and the need to build substantial bridges of racial connection, or the city would continue in the kind of tragedy of the South that there would be unrest and people would be disappointed. That’s why I ran for mayor.”

Honor, duty, respect—The Citadel’s core values. Riley was born to be a public servant, and his leadership was fostered by his Citadel education. “There is nothing more powerful or more important to the success of our country, or our community,” he said in his commencement speech to the Class of 2003, “than citizen service…. But what does this service ethic have to do with The Citadel? Everything. The brass, the plaque that I passed in the sallyport in Padgett-Thomas every day with the wonderful words of Robert E. Lee, ‘Duty is the sublimest word in the English language.’ For duty is service, and service is duty. You learn that here and perhaps unknowingly as well. This ethic of service stems from basic fairness, human fairness. The Citadel is profoundly about just that.”

Riley took his duty to heart. When he took office in 1975, he inherited a city steeped in racial discord. As mayor he hired African Americans into city administration, including Reuben Greenberg, the city’s first black police chief, who served for 23 years. When Hugo, a major category 4 hurricane, swept into Charleston in 1989, devastating homes and wreaking havoc in the city, Riley was praised for the way he brought Charleston together during a crisis. Another crisis that occurred at the end of his last term in June 2015, a hate crime in which nine members of the Emanuel AME Church, including pastor and state senator Clementa C. Pinckney, were killed by a white supremacist, illustrated how unified the Holy City was with Riley at the helm. Instead of anarchy, the citizens of Charleston, black and white, came together to mourn the loss of nine beloved members of its community and worked to heal the wounds, demonstrating to the world that the actions of one deranged young man could not destroy Charleston.

“Being a leader means that you have to lead,” Riley said.

“You have a duty to move forward—to advance. You have a duty to people following your lead. And then to work intensely to get to the point where you’re confident about the right course of action. You accept responsibility to get from here to there and do everything you possibly can for the best course of action. Then you inspire and assist and encourage people to follow, and then you work hard to develop the resources so you can do it. As a leader, as mayor, you have to lead the people under your command so they’ve got to be motivated. They’ve got to respect you. They’ve got to be confident in your course of action, and then you’ve got to lead a community. It’s a democracy, so they have to feel, for the most part, that you’re moving the community and them in the right direction.”

Riley never did a TV interview without first asking himself what the goal of the interview was and knowing what he was going to say. “Because what I’m looking at isn’t a camera—I’m looking at a family in their den, and I’m talking to them.”

When Riley returned to The Citadel in 2016, he returned with a lifetime of valuable experiences and wisdom to impart to cadets. The lessons he teaches could fill volumes of history books. But instead of books, cadets get the real deal—former Charleston Mayor Joseph P. Riley Jr. in person—a legend, a visionary, a leader. In addition to his Broad Street office, the former mayor has an office in Capers Hall where he once took classes as a cadet. Where he previously sat behind a desk, he now stands behind a lectern. The 17-year-old, who once held the promise of something great, has returned home to mentor a new generation of cadets who now hold that same promise. 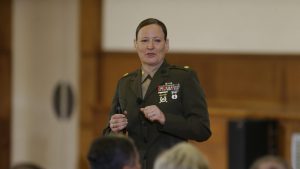 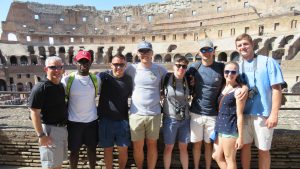 A Ticket to Engineering Success